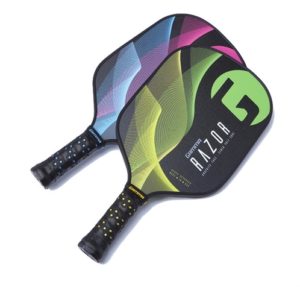 Several members of the Upper Bucks Pickleball club recently played with and reviewed a new Pickleball paddle by Gamma, the Razor Graphite.  Overwhelmingly, the response to this new paddle was extremely positive!  The most often heard comment was, “this paddle has the best grip I have ever had”. The grip is different than the grip on other paddles.  Our reviewers remarked that the grip was soft, yet had a bit of tack, which would be perfect for players who perspire while playing.  One of our reviewers also commented that the paddle was very well-balanced, and really has improved his game.  Another stated that the Gamma Razor exhibits great power form the baseline, yet had great control at the non-volley zone. We think the poly core and the graphite face are a very good combination which allows for excellent power and control.  Additionally, several players mentioned that the Gamma razor had a larger “sweet spot” than the paddle they were using previously, and that the edge guard is designed in a way that virtually eliminates mis-played shots. The Gamma Razor is also a good-looking paddle with modern, eye-catching graphics.  All-in-all, we think this is an excellent paddle choice for any level player.  We would like to thank Pickleball Central for the opportunity to review this paddle.  Learn more about the Gamma Razor Graphite, or other Gamma Paddles on PickleballCentral!